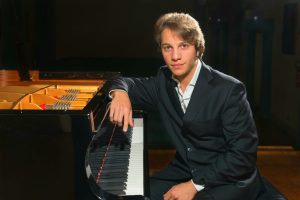 Alessandro Tosi was born in Rimini in 1991. He started playing piano at age of  9 with M° Bartolucci. In 2005 he continued his studies under the guidance of  M° Valentini at the “G.Rossini” Conservatory in Pesaro, where he graduated in 2012 with full marks, honours and honorable mention, receiving a scholarship reserved to the best graduates of the year. He is currently attending the International Piano Academy “Incontri col Maestro” in Imola with M°Enrico Pace and M°Igor Roma.

He has distinguished himself in the music scene by winning the First Prize in more than 20 National and International Competitions in Italy, like “Città di Riccione”, “Città di Cesenatico”, “G.Rospigliosi” (in four different edition), “Città di Pesaro”, “Città di Castiglion Fiorentino”, “A.M.A. Calabria”, “Città di Moncalieri”, “Lia Tortora” in Città della Pieve, Award “Lamberto Brunelli” in Vicenza, reserved to the best graduates in Italy, after which he held a concert at the Festival “Settimane Musicali al Teatro Olimpico”, “Maria Giubilei” in Sansepolcro, “Città di Firenze – Premio Crescendo” (also winner of the “Premio Crescendo” among all the categories of the piano section) in Florence, “Città di Piove di Sacco” in Padua, “Carlo Vidusso” in Milan.

He is also studied composition with M° Lamberto Lugli.

Hobbies and other interests: every kind of sports (swimming, gym, pilates, running) and Tv series.

*Alessandro Tossi withdrew from the competition due to an unexpected injury*