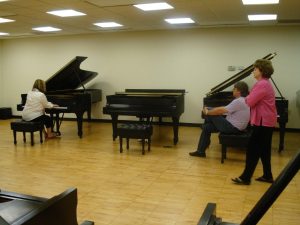 “The Merrill Lynch 88 Key Society kick-off campaign to purchase a new Steinway D Grand Piano began Thursday, March 29th during the evening of the Baton Rouge Symphony Orchestra’s Entergy Masterworks Concert. Three short weeks later, the Thursday, April 19th Masterworks Concert set the stage for the Merrill Lynch 88 Key Society’s “grand” announcement that funds needed to purchase the new piano had been raised in an unprecedented amount of time with support from the community and sponsors.

Taking the stage prior to the March 29th concert, Carole M. Marshall, Past Board Chair of The Baton Rouge Symphony Orchestra, revealed the founding and history of the Baton Rouge Symphony Orchestra’s Merrill Lynch 88 Key Society. In 2005, while performing as a guest artist of the Irene W. and C.B. Pennington Foundation Great Performers Concert Series, internationally acclaimed pianist, Yefim Bronfman, confirmed what the Orchestra had suspected—that it would soon need to replace the existing piano. With Bronfman’s assessment, the Orchestra recognized it would be in need of the highest quality instrument to continue to attract world-class performers. The Merrill Lynch 88 Key Society (a piano has 88 keys) dedicated to the purchase and maintenance of a Steinway D Concert Grand Piano was therefore founded.

Louisiana’s renowned pianist Constance Carroll has agreed to be honorary Chair of the Society with Carole Marshall serving as chair. During Marshall’s introduction, she introduced Anthony S. Kurlas, Director & Vice President of Merrill Lynch. Kurlas commented, “The Baton Rouge Symphony Orchestra is a significant cultural and educational ‘jewel’ within our community. We are proud and honored to play a small role in forming an essential partnership with the Baton Rouge Symphony Orchestra and the community to help make the vision of purchasing a world-class piano a reality. It never ceases to amaze me to see what can be accomplished when good people of the community unite together for a common cause.” Kurlas explained that the two fundraising goals were to purchase the piano by offering sponsors one of 88 Keys at $1000 per key, and to also raise funds for a maintenance endowment of the piano.

Kurlas then surprised over 1400 patrons attending that evening’s concert when he announced, “Merrill Lynch would be matching dollar for dollar every piano key that was purchased during that night.” During the post concert champagne reception it was announced that 73 keys were purchased that evening. In accepting the pledges BRSO Board Chairman Johnny Tate stated, “The BRSO is deeply indebted to the individual key donors, Merrill Lynch for the matching $73,000 contribution and the 88 Key Committee for this unbelievable partnership in making the new Steinway a reality. It’s an exciting time for the BRSO, and the new Steinway will only enhance the performances of this world-class orchestra.”

Three weeks later, during the opening announcements of the April 19th concert of the Orchestra, Marshall announced that due to the continued generosity and donations following the March 29th kick-off, funds needed to purchase the piano had been raised. “On March 29th, you were asked to purchase a key for a new concert hall piano, and your response was amazing. Thanks to you, the piano is about to be ordered!”

That evening a number of exciting announcements came from the stage. The Steinway Society of New Orleans, represented by Steve Kinchen, presented a generous donation of $10,710. Kinchen commented, “It has been an ongoing privilege and a personal honor to develop the partnership between the Steinway Society of New Orleans and the Baton Rouge Symphony Orchestra. The long-term vision and commitment to excellence throughout the organization is uncommon and should serve as a shining example of success to the rest of the arts community throughout Louisiana.”

Next, Bebe Facundas, Founder & President of the Friends of the Centroplex Theater and Performing Arts Center presented a check for $20,000 to purchase the “Middle C Key.” Facundus stated, “The new piano brings an even higher level of possibilities to sustain and continue an acute awareness of the arts.”

Anthony Kurlas then made the presentation of a check for $73,000 which was the final number of keys purchased and matched by Merrill Lynch making the purchase of a new piano a reality. As Kurlas commented, “Last month the new piano was a vision, and I asked the community to partner with the Baton Rouge Symphony Orchestra and Merrill Lynch. As a direct result of the community’s overwhelming response, today the new piano is a reality we are honored to play a small part in the advancement of such a special organization.”

Music Director, Timothy Muffitt voiced the feelings of the entire Orchestra family when he stated, “This is an extraordinary display of personal, community and corporate support for the orchestra and the arts in Baton Rouge. We are so fortunate in our city to all those who gave their time, creativity and resources to make this acquisition of a new instrument a reality. The BRSO has moved into a new arena in the music world, and this instrument will help us continue to further our artistic growth and the contribution we make to the quality of life in Baton Rouge.”

Founding members of the Merrill Lynch 88 Key Society will attend the christening of the piano by Constance Carroll at a private recital for the members of the Society in October and Yefim Bronfman will also return to Baton Rouge, October 11, 2007 as the first Masterworks Guest Artist to perform on the instrument. Founding Society members will also be remembered on a plaque listing their name which will be prominently displayed in the River Center Theatre this fall; receive a Merrill Lynch 88 Key pin; as well as be recognized in the program book as a founding member of the Society.

While many keys have been purchased, the endowment exists to maintain the instrument. Anyone at any time, can make a contribution, at any level, to the endowment by calling the Orchestra office at 383-0500 or sending in a contribution and noting it to the Piano endowment. The piano, if cared for properly, has a life of forty-plus years. “