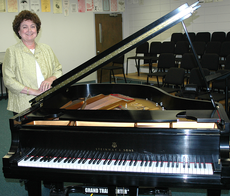 Eighteen pianists will play six pianos during a fundraiser to purchase Steinway pianos for the Division of Music. The performance is part of the second annual Monster Piano Concert set for Sept. 22 in Talbot Theater. The Office of Institutional Advancement and the Division of Music worked together to bring back the Monster Piano Concert because of the overwhelming praises of the first concert and the request of several attendees and participants from last year.

“The first Monster Piano Concert was held as part of the Nicholls first 60 years celebration, and people enjoyed it so much they requested it again,” Carol Britt, head of the Division of Music, said.

Last year’s performance provided the community with a night of culture and helped further enrich the University’s commitment to the arts by providing the Division of Music with three Steinway pianos.

This public event will serve wine and hors d’oeuvres at 6:30 p.m. until the beginning of the performance at 7:30 p.m.

Faculty, students, alumni and guests will perform many pieces during the event. There will be a variety of presentations, including multiple pianists playing together.

Britt said the concert will feature many of last year’s musicians and will be wonderfully entertaining for everyone involved.

Tickets for the event will be $50 for general admission, $25 for University faculty and staff and $15 for students.

The division hopes this year’s concert will help them receive two more pianos. All proceeds will go toward the purchase of the Steinways.

The Division of Music is a vital part of the University because of its ability to connect with people from all around, Britt said. Its performances have been well received by the public over many years.

“We reach so many people in the community,” Britt said. “These recitals and concerts draw a lot of people to the campus.”