​The Rodrigue Steinway “Blue Dog Piano” brings together the great works of both George Rodrigue and Hall Piano Company of New Orleans. Hall Piano Co. has completely restored this piano to its original condition using 100% genuine Steinway parts. The action rebuilding was done by Poppy Miles who is a graduate of North Bennett St. School of Piano Technology & Rebuilding, and president of the New Orleans Chapter of the Piano Technicians Guild.

The belly work of the piano which consist of soundboard restoration, installation of new wrestplank, strings and tuning pins, hitch pins, agraffes, duplexes, and all associated felts was done by expert rebuilder of 25 yrs., Mr. Thomas Larson. Mr. Larson was also responsible for the regilding of the plate and detail lettering on the cast-iron frame.

All cabinet restoration, case prep for artwork, and beautiful ebony satin finish was done by master refinisher, Mike Gillon. This included extensive cabinet repair, original finish removal, sanding, filling and leveling of primer coats, and concluded with 7 coats of Steinway & Sons satin full-bodied heavy black lacquer which is allowed months of curing time before the time consuming process of polishing out the cabinet.

Final concert preparation of A-163367 was performed by Steinway Concert Technician Mr. Matthew McWilliams. This includes an exhaustive 27-step concert preparation of all 6400 moving action components to ensure the highest level of playability of this piano.
The digital reproducing system installed by Hall Piano Company is a QRS PianoMation II system complete with PNOScan digital recording interface and will allow for recording of the many fine performances that will occur on this piano. Hall Piano has been a leader in the installation of computerized reproduction systems for over 35 years.

For more photos of the restoration of the Rodrigue Steinway 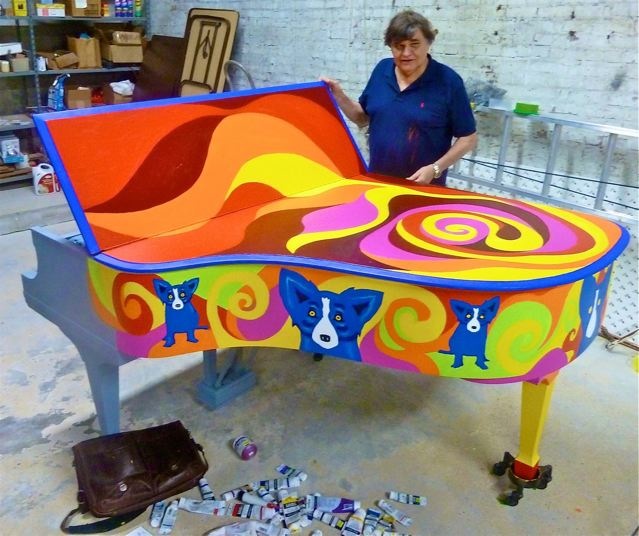 George Rodrigue (b. 1944) was born and raised in New Iberia, Louisiana, the heart of Cajun country. Even today his work remains rooted in the familiar milieu of home.

Rodrigue studied art at the University of Southwest Louisiana in Lafayette, followed by the Art Center College of Design in Los Angeles, where the graduate school’s curriculum provided him a nuts-and-bolts foundation in drawing and painting.  He then returned to Louisiana and developed his unique style, using the area’s visual symbols not only to capture the essence of his personal world, but also to express his spiritual and cultural ideas as they pertained to Louisiana, to the South, and to America. 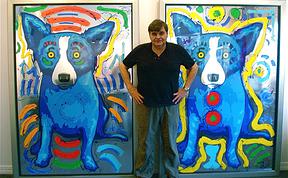 Using the oak tree as his subject in hundreds of paintings in the early 1970s, Rodrigue eventually expanded his oeuvre to include the Cajun people and traditions, as well as his interpretations of myths such as Jolie Blonde and Evangeline. It was one of these myths, the loup-garou, which inspired Rodrigue’s most famous series, the Blue Dog.

As a boy, Rodrigue knew of a werewolf or ghost dog that lurked in sugar cane fields, threatening to haunt bad children. The legend said nothing about the loup-garou’s color, but Rodrigue thought the night sky would cast a blue-grey shade on its fur. Over time the image on his canvas became friendlier, with a brighter hue and increasingly abstract settings. No longer the loup-garou, the Blue Dog, as well as other series such as Bodies, Hurricanes, and Reflections continue to challenge Rodrigue artistically.   The Blue Dog Steinway is the first and only piano that Mr. Rodrigue has painted.