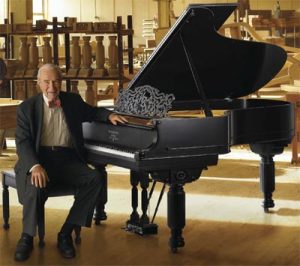 Henry Z. Steinway has been chosen to receive the prestigious National Medal of Arts Award from the National Endowment of the Arts, which was established by Congress in 1984 to recognize long standing service to our nation by distinguished individuals in the field of culture and the arts.

Presidential initiative is managed by the National Endowment for the Arts
November 14, 2006

Washington, D.C. — President George W. Bush today will announce the recipients of the 2007 National Medal of Arts. Nine medals will be presented by the President and Mrs. Laura Bush in an East Room ceremony at the White House. The National Endowment for the Arts manages the National Medal of Arts nomination process and notified the artists of their selection to receive a medal, the nation’s highest honor for artistic excellence.  “These individuals and this organization have all made enduring contributions to the artistic life of our nation,” said National Endowment for the Arts Chairman Dana Gioia “Whether by composing profound choral works, or creating paintings of both beauty and unease, or giving us wonderful stories steeped in Native American traditions, their work has enriched our national culture.”

Also receiving an award from the President will be Erich Kunzel, conductor of the Cincinnati Pops Orchestra and a 2006 National Medal of Arts recipient who was not able to attend last year’s event.  The National Medal of Arts, established by Congress in 1984, is awarded by the President and managed by the National Endowment for the Arts. Award recipients are selected based on their contributions to the creation, growth, and support of the arts in the United States. Each year, the Arts Endowment seeks nominations from individuals and organizations across the country. The National Council on the Arts, the Arts Endowment’s presidentially-appointed and Senate-confirmed advisory body, reviews the nominations and provides recommendations to the president, who selects the recipients.

Henry along with his wife Polly, will be receiving this Medal of Arts Award today in a presentation ceremony in the East Room of the White House hosted by President and Mrs. Bush.