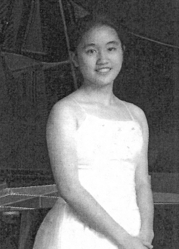 Elaine Zhong, born in Pasadena, California, started private piano lessons at the tender age of three. At the age of six she began to compete regularly and has since been a winner of numerous piano competitions. A few of Elaine’s most recent achievements include: first place winner of the Cypress Baroque Competition, second place winner of the Los Angeles Liszt International Competition, first place winner of the Southwestern Youth Music Festival’s Open Solo & Open Chopin Scherzo category. Also, she received second prize at the Virginia Waring International Piano Competition and was a semifinalist at the Oberlin International Piano Competition as well as the Schimmel International Piano Competition. Elaine has also played in the Winter Honors Recital held at Colburn School’s Zipper Hall consecutively each year from 2007 to 2009. Currently, Elaine is a scholarship student at the Colburn School of Performing Arts in Los Angeles, where she is a student of Ory Shihor. Her past teachers included Xiao C. Liu, Li Wang and Chun-Yi-Wang. Besides music, Elaine is a straight A student at school. She enjoys reading, math, and running. Recently, Elaine finished her first marathon and is training to do a second one. Also, she was selected by her school to attend the Junior National Young Leaders Conference in Washington D.C. She has continually been on the National Honor Roll and has been featured in Who’s Who in Mathematics.