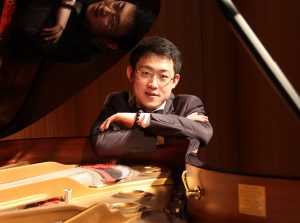 He has also been awarded top prizes at the New England Conservatory Honors Competition, the Five Towns Music and Arts Foundation, and the International Keyboard Institute and Festival.

He has performed widely including at Carnegie (Weill) Hall, Ukrainian Institute, Hunter College in New York, and at New England Conservatory`s Jordan Hall in Boston. His performances of the complete Chopin Etudes, a feat for any pianist, were described as “extraordinary.”

Making his solo debut at age eleven, he studied at the Shenyang Conservatory of Music and pursued undergraduate studies at the Mannes School of Music, as a student of Vladimir Feltsman and Victor Rosenbaum, with whom he continues to study at the New England Conservatory as he pursues his Master of Music degree.